Long time – no see… Once again – contrary to my best intentions there was a gap in getting stuff published on this blog. The theorists of blogging say that nothing is more detrimental to the readership than irregularity and unpredictability…

Anyway – I hope that blogging sporadically is still better than silence..

Well, first of all the last 7 weeks have been very packed.

However, finally it looks that the Super-Soft Ball Rolling Massage technique enters into the maturity phase with clear distinction between the skill levels – so I am feeling a lot better about the release of the intro course. Hopefully by the end of the summer  we’ll get everything finished – as you all know too well – I am not known for lack of thoroughness :-)

On the one hand, excellent progresses related to the evolution of the dorsal compartments (the back; vertebral column etc. ) – and respectively tons of material worthy of quite impressive “before/afters”.

On the other hand – I am very happy to have achieved a next milestone in the development of Super-Soft Ball Rolling Technique – the increased volumetric response, which integrates the benefits of the 3Q and the ball rolling at the same time.

As I am saying that – I realize that I have uploaded the video “ABR Technique Essence” to the Vimeo library but completely overlooked embedding into the blog:

On a practical side – I strongly encourage all of you to learn the recent upgrades of the Ball Rolling – the “Intense Technique” and the “Submerged Technique”.

There were about 30 professional attendees – MDs, PTs, OTs – who specialize in Cerebral Palsy.

Frankly, over the years of life at the fringes being labeled as “alternative” I am used to the resistance and certain arrogance of the medical community towards “unofficial” newcomers.

Well, this time was a refreshing difference.

It appears that our duo with Mark finally managed to strike the right chord and engage the medical audience really deeply. Four hours is a long period of time – but the attention never waned.

I think that finally we have found a winning formula 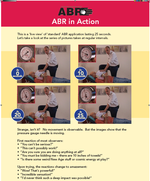